The Catholic Church is a political organization

There's been a bit of a fuss in Pittsburgh over a public art performance in which a CMU student dressed up as the pope and handed out condoms -- while showing off her cross-shaped pubic hair. It took a couple of days, but eventually someone complained: first the local bishop, and then a bunch of rabble-rouses across the nation (such as the "Catholic League").

The bishop seems to be the most articulate and reasonable among these complainers. He apparently is primarily concerned with the use of the cross in this demonstration, and with an increasing disregard for "the sacred". My inclination is to respond "fuck the sacred". In my experience, "the sacred" is a ploy that some people use to impose themselves on others, and I am quite happy to say that either everything is sacred, or nothing is. (These opinions have not received extensive thought, so I'd love to discuss them). Furthermore, if a powerful person uses a sacred symbol to reinforce his authority, then he is the one who politicized it and invited sacrilege.

The more obnoxious complaints are of the "victimized American Christian" variety... as if American Christians are an oppressed class. Catholics may have some claim to special consideration in America, since they were historically marginalized (particularly if they migrated from English-occupied Ireland), but as a group, Catholics have made a pretty solid transition into the establishment. For instance, they are over-represented in Congress (31%), and it's been about 50 years since the USA had it's first Catholic President. Given this influence, I'm don't give serious attention to superficial claims that Catholics are being treated unfairly. That's not to say that Catholics aren't subject to hate crimes (like every other group), but only that there is no reason to assume that any mockery of Catholicism represents anti-Catholic bigotry and likewise that our society doesn't need organizations that are specifically dedicated to protecting them (such as the "anti-defamation" Catholic League, which was founded after Kennedy's presidency).

So anyway, as is common for American Christians who deny their privilege, these offended Catholics are claiming that a major university (i.e. liberals) would not tolerate mockery of other religious figures. My first counter-example would be the Iranian Ayatollah's, and I'd follow up with the King/Queen of England (head of the Anglican church), Pat Robertson, and the generic character of a revival tent-preacher or faith-healer. Granted, most of these are Christians, but there's a good reason for that -- only Christian religious leaders have substantial influence in our society. My remaining counter-example is a political leader, but so is the Pope. 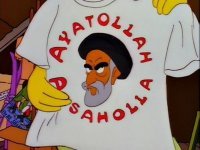 The Pope is not only is influential, but he heads an explicitly political organization. As such, he is fair game for criticism and mockery. While all religious institutions have political impact, this passive political influence is not enough for the Catholic Church. Rather than just teaching that "abortion is evil" and then allowing laymen to take up the political battles, Church leaders insist on getting directly involved with organization of political campaigns and lobbying of politicians. For instance, the US Conference of Catholic Bishops takes positions on state policies that are not directly relevant to the church (e.g. access to emergency contraceptives), and many bishops use their religious authority to pressure state officials to change public policy (e.g. by denying communion to supporters of abortion rights).

While the political activities of the Catholic Church in the USA are not very intense, the church can  be downright oppressive in countries where it is dominant. The pressure that they expert on legislators is much more intense in parts of Latin America, both because exclusion from the Church has a much greater impact and because the Church strives to influence a wider range of topics. Furthermore, there are several countries where the Catholic Church receives special privileges and powers (such as subsidies in many countries).

All in all, the Pope is a political leader, therefore he has opened himself up to a range of attacks that would normally be considered inappropriate if targeted at catholic laymen or a low-key religious leader. 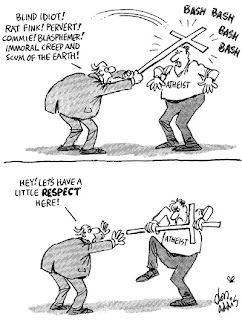 tip
Posted by Ricketson at 8:09 PM