No rule of law: when everyone has committed a crime

I am very dissapointed by Carnegie Mellon's response to the brouhaha over the "half-naked pope" costume worn by one of their art students in a parade. The student has been charged by the campus cops with indecent exposure. The authorities claim that this is simply a matter of violating a local ordinance, and not about the subject of this woman's performance. For good measure, they also charged a man who got naked as part of a non-political performance in the same parade. 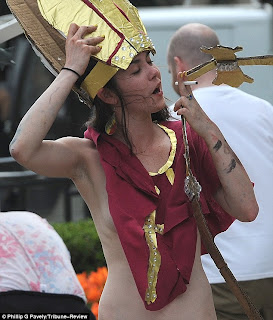 My strong suspicion is that this is a political prosecution, orchestrated by the school's administration in order to placate a bunch of conservative rabble-rousers. There's also the fact that the Catholic Church has a lot of influence in Pittsburgh; some of this influence comes from their ownership of a lot of land in CMU's neighborhood, which gives them influence over local zoning ordinances and would allow them to refuse to sell said land that CMU might want for future expansion.

There are two lines of evidence for my suspicion that this is not simple law-enforcement. First, it seemed to take a long time for the police to charge this woman. I'm sure that cops were present during this parade, and they could have issued her a warning or citation on-the-spot. The fact that they did not immediately issue a warning suggests that nudity is tolerated under these circumstances.

My second line of evidence that this is a political prosecution comes from various reports that nudity has traditionally been tolerated (if not encouraged) at these parades. I read this claim in the comments section of an article posted at the website of the CMU student newspaper, the Tartan when this all started. I followed up by looking at the official promotional material for this parade. Notably, the pictures from the 2013 parade have been removed from Flickr. However, the 2012 parade pics are still available. They make it clear that the parade is typically pretty raunchy (facebook shows a subset of the more tame photos). There are even a couple of pictures showing exposed buttocks (and ass crack), which falls foul of most indecency ordinances that I've looked at. For the sake of documentation, I'm going to repost the picture here, though I must warn you that it isn't pretty (original):

To top it off, the School's Facebook account even promoted the event by saying "last year got a little out of hand... we expect nothing less this time around." When your combine that attitude with the student's report that she was encouraged to be politically provocative, I arrive at the sad conclusion that she is being scapegoated as part of a conflict between the Arts faculty's impulse to be provocative, and the university administration's impulse to constantly expand the influence of the institution. This has made a mockery of the law, and once again shown how arbitrary law-enforcement can be... to the point that there is no law, just power plays.

The only good thing about this is a sort of Streisand effect -- where the Church has brought attention to it's efforts to silence dissent and caused me to question whether "sacred" is a bad word, and CMU has exposed it's politicization. This may even stoke a bit of a "free speech movement" on a campus that is historically apolitical and has a high rating from FIRE (the Foundation for Individual Rights in Education).

Some other thoughts:
Boy @ the window

Posted by Ricketson at 3:31 PM