I've been thinking about the relationship between violence and freedom (V&F) for a while, and planned to eventually write about it, but the hub-bub over American casualties in Iraq prompts me to address the issue now. I saw this cartoon called "Grim Countdown" a couple weeks ago, and thought that it was totally inaccurate and unfair -- little more than some cheap demagogy by some right-wing fanatics. 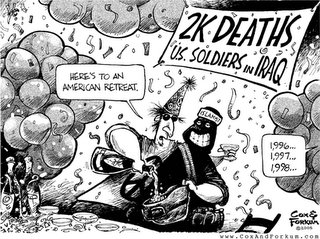 I know a bunch of people who publicized this symbolic milestone, and not a single one of them gave me any reason to believe that they actually welcomed the death of American soldiers. Yes, they used this milestone as an opportunity to make a political point, which seems a bit crass--but that's how politics works; the pro-Bush crowd also takes advantage of symbolic events to make the case that their views are correct.

A person is in an difficult position when they claim that the government's policies are disastrous for us; to justify themselves, they need to bring attention to the consequent disasters, and risk giving the impression that they welcome these disasters. It's unfair and unwise to criticize them on those grounds.

In all the fuss over the 2,000 military deaths in Iraq, I came across a single (American) person who welcomed the deaths of these soldiers, and I only noticed this person because another anti-war commentator had pointed him out in order to condemn him.

I'll have more comments on that later.
Posted by Anonymous at 1:25 PM

You said, "In all the fuss over the 2,000 military deaths in Iraq, I came across a single (American) person who welcomed the deaths of these soldiers, and I only noticed this person because another anti-war commentator had pointed him out in order to condemn him."

I fortunately don't know anyone who was happy about this either, but I found a pictorial showing a few who certainly looked the part.

In those pictures, the protesters clearly weren't somber, but they didn't seem to be in a celebratory mood either--they just seemed to be at another protest. It's crass for them to use these deaths as a political prop, and rather stupid to push this blatantly insincere "memorial", but it isn't traitorous, as the above cartoon suggests.

The points of the above cartoon are, I believe, that (1) the widely publicized buildup to this "milestone" was unseemly and that (2) the people marking said "milestone" were mainly of the anti-war and pacifist persuasion. While I can understand someone arguing that invading Iraq was a mistake, the notion that war in and of itself is wrong is clearly an indefensible position that can benefit only the terorists.

I can't speak for Cox and Forkum, but this is what I think they meant.

BTW: I know for a fact that they are not conservatives, libertarians, or liberals.

It's the depiction of comradarie between the war protesters and the terrorists that really bugs me.

If Cox and Forkum had just placed the smiling terrorist in the background, the cartoon would have very different connotations and wouldn't be offensive.